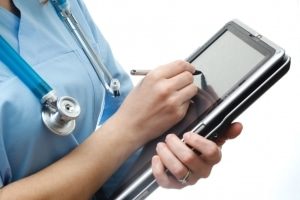 On July 30, 2015, the state of Missouri formally authorized electronic prescription of controlled substances. Missouri was the final state to adopt the practice, which is now permitted in all fifty states.

Controlled substances are broken down into 5 categories, or “schedules,” with the severity of the drug and potential for abuse indicated by the schedule number. Schedule I drugs, like heroin, methamphetamine, and LSD, have no currently accepted medical use, and cannot be prescribed. Schedule II-V drugs, like morphine, anabolic steroids, and Xanax, are legal and can be prescribed by physicians.

But some states moved slowly to enact the legal changes that would allow e-prescriptions in that specific state. And while all fifty states have now done so, there still remains a mismatch between the proportion of pharmacies equipped to receive e-prescriptions and the proportion of care providers who submit their prescriptions electronically. As of December 2013, one-third of pharmacies could dispense controlled substances from e-prescriptions, but only 1% of physicians prescribed them that way. There are challenges for physicians in using e-prescriptions because of specific requirements they must meet in order to do so: using EHR software that meets regulatory standards, and following highly specific security measures.

Abuse of prescription medication is a veritable epidemic in the United States. According to the CDC, abuse of Vicodin, OxyContin and methadone cost 125,000 people their lives in the last 10 years. Deaths from prescription painkillers, or “opioids,” are more common than deaths from both heroin and cocaine combined. Even more troubling, for every person that dies of overdose from opioids, the CDC estimates there are 130 more that are addicted and 825 people who use them recreationally.

As electronic health records replace paper records on a national scale, hospitals and physicians are seeing a significant reduction in medical errors; EHRs include a comprehensive patient history, allowing for better coordination of care, immediate access to accurate and complete information, and the ability to track drug dosages and possible drug interactions. But for EHR to work it’s vital that all medical information be integrated into the system. Allowing electronic prescriptions for controlled substances will help providers track patients’ medication use, reducing the chance of a patient receiving prescriptions from multiple doctors or committing prescription forgery.

With all fifty states now adhering to the same rules for electronic prescription of controlled substances, electronic health records may prove to be an efficient and effective way to lower the frequency of drug abuse throughout the country.