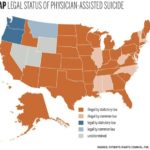 California’s End of Life Option Act, also known as the “right to die” bill, became state law in early October 2015. The law gives terminally ill patients with six months to live the option to end their life on their own terms via physician-assisted death. The passage of the bill was a triumphant victory for the “Death with Dignity” movement that commandeered the nation’s attention throughout terminal brain cancer patient Brittany Maynard’s last days.

But now, concerns have arisen as to whether the right to die bill will incentivize patients to choose death over life-prolonging treatment options.

As the death with dignity movement circulates around the nation, the question of who should pay for life-ending care remains. Often, drugs that end a life are far less expensive than drugs that extend a life. The ethical controversy becomes more complex when a patient has a government-backed health plan.

Dr. Aaron Kheriaty is a UC Irvine psychiatrist and director of the university’s medical ethics program. He argues that if an insurance company covers lethal drugs, but fails to cover end-of-life treatments that could postpone death, they will effectively be pressuring patients to choose death.

Medi-Cal, the health program for more than 12 million of California’s poor, has not yet decided whether it will cover lethal drugs. According to William Toffler, an Oregon physician, the barbiturates prescribed for physician-assisted death cost about $1,500, while average healthcare spending for a patient’s last year of life is over $33,000. The discrepancy between the cost of living a little longer and the cost of dying could lead to a conflict of interest for doctors, argues Toffler; physicians are tasked with saving lives, but what happens when $33,000 only buys someone a few extra months?

Barbara Wagner was a terminally ill cancer patient in Oregon whose doctor prescribed her a medication that he hoped would lengthen her life. But since the treatment cost $4,000 a month, her insurance sent her a letter saying they would not cover it. In the same letter, they included information about an “alternative treatment” that they would cover: physician-assisted death.

A television interview with Wagner brought attention to her case, and led some people to fear that too many lives will be ended just to save money. The medical ethics debate surrounding physician-assisted death, which started in Oregon when its right to die bill was passed in 1997, forces California’s state government and insurance companies to grapple with the implications of covering lethal drugs and not costlier end-of-life options.

Research has shown that physicians concerned about keeping costs down are most likely to prescribe lethal drugs for the terminally ill than those not concerned about costs. As California attempts to lower the costs of Medi-Cal – which have risen 74% since 2013, reaching $91 billion a year – more and more physicians will worry about conserving resources. Some consider end-of-life care to be highly cost-inefficient, since extremely expensive treatment options often only give patients a few more months of life.

Coombs Lee, president of Compassion & Choices and co-author of Oregon’s death with dignity bill, argues that Oregon patient data doesn’t support the idea that patients are being pressured to end their lives. Ezekiel Emanuel, oncologist and bioethicist from the University of Pennsylvania, agrees; his research has found that physician-assisted suicide would save less than 0.1% of healthcare spending.

California lawmakers, hoping to avoid a situation like Wagner’s, have prohibited insurance companies from giving information about lethal drug options in denial letters. Christian Burkin, a spokesman for the Assemblywoman that wrote the bill, said, “No one should be subjected to even the appearance or suggestion of being influenced to choose the end-of-life option.”
For more information/questions regarding any legal matters, please email info@nelsonhardiman.com or call 310.203.2800.

Harry Nelson Interviewed on NPR: With telehealth abortion, doctors have to learn to trust and empower patientsHarry Nelson Interviewed on BBC News: US to require negative Covid tests for travelers from ChinaClient Alert: Priority Privacy Update – Social Media and the Erosion of Medical Privacy8 Nelson Hardiman Attorneys Named to the 2023 Southern California Super Lawyers ListClient Alert: Cannabis Businesses Can Use Writ of Attachment to Expedite Collections